In Tambaram, near Chennai there is Joseph KarunaiIllam- St.Joseph Hospices- Run by “Father Joseph”, It is neither an Illam(house) nor an abode of Karunai(Kindness). Its’ merciless acts had come to public openly on February 21 & 22.

If this act of barbarism had been done by any Hindu charity or Hindu organisation, the whole country would be put on fire, bandhs would have been organised, Modi would be on trials, all national channels would have come to Tamilnadu to publicly hang the organisation in question. The Human Rights organisations seemed to have closed their eyes, ears and mouth.

What is the barbaric inhuman acts done by this KarunaiIllam, all in the name of social service? This organisation would go to government hospitals and would look out for any one-orphaned or without any support-either old or new or young. If there is a dead body, this Christian Organisation would take care of the dead body and the government hospitals would happily give the dead body or who are going to die.

This Christian Organisation would also take any one begging on the road or sleeping on the road to their home in the name of protecting them. No one knows, how the government hospitals can give dead body to a charity organisation just like that, when they make hue and cry to give the dead body, even for a normal ordinary family member in the society? How did they give the dead body just like they sell vegetables in the market?

On 19/02/2018 an ambulance with registration number TN 57 AM 3351 was stopped by people on hearing a cry of woman, who sought help and cried “Save me, save me”. The ambulance was stopped and two elderly were rescued. It has come to the notice of public, that this Christian Organisation take the dead body regularly from the hospitals and store it in their Compound as shown here.

It appears that the aged and orphaned people are tonsured and treated like mentally unstable persons and their skeletons and organs are sold for a price.

Some are killed and some dead bodies are stored in the compound as shown above in the picture. Unfortunately no national media has taken note of it. No channel in Tamil Nadu had any discussions on this murky episode involving a Christian Missionary. The human rights organisation, which talk about killings of criminals in U.P. silently following the principle of three monkeys.

On the other hand NDTV, (which reported the killings in UP on the eve of Global Investors Summit in order to discredit the UP government and talked about human rights violation with a purpose in the name of investigation)seems to be snoring. Those who cried and attacked the Modi government, from the top of Kanyakumari, when fishermen belong to Christian community were missing due to cyclone, now are dead silent on seeing the atrocities committed by this Christian Charity organisation.

It appears that they have handled more than 1600 dead bodies-either stored in their compound or body parts are sold abroad or killed for skeleton.

The channels in Tamilnadu are dead silent. Kamal Hassan is very quiet on this. Another actor, Prakash Raj, the supporter of Left & Congress, was taking into task the Central government and attacking directly the Prime Minister for a killing of a maoist supporter in Bangalore, strangely silent.

The politicians – Veeramani, Stalin, Vaiko, Daniel Raju(famous or infamous for linking with judiciary press conference), notorious Thirukumaran Gandhi (actually a Christian , who has changed his name to hide his religion, while attacking Modi on a nuclear project in Tamilnadu), Seeman, the supporter of LTTE- are not opening their mouths on this demonic acts of Christian organisation.

The notorious Vairamuthu, attacked one of the greatest saints of Tamil, seemed to have gone hiding. Strangely, the state government is a silent witness to this inhuman atrocities.  As the Fake NGOs are getting cracked down, Are the christian missionaries getting involved now in Body parts selling business or it has been going on for long time? Will the State and Central government take action? 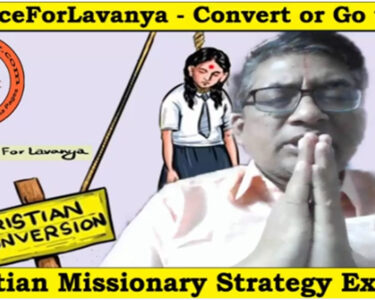 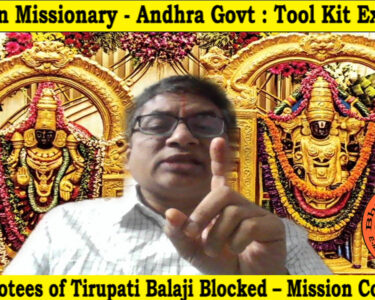